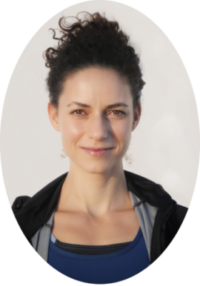 My name is Szabina Sinkovits and I’m a certified hatha yoga teacher, medicinal and sport massage therapist. I had been learning thai massage and foot reflexology techniques at a basic level as well. Originally, I’ve graduated as an architect at the Budapest University of Technology and Economics. I’ve been practicing yoga since 2003 and I’ve been teaching it since 2011.

What was the reason of starting my yoga-practice? First of all the effects of the persistent and unescapable overwork at the university: back-pain, exhaustion and other health issues. I had high hopes for yoga because of the promises of the advertisement which I read on the university bulletin board : “you will have more energy”, “your concentration skill will grow”,  “you will be able to manage your locomotor problems”.  So I applied for the course. And the fact was that it had happened so. Not immediately but in a few weeks I met the experiences: reduced pain in my back, incredibly growth of my energy level, more effectiveness at my studies. Later also my lifestyle changed including my diet.

But understanding the essence of yoga entered my life only after years with other experiences. I realized that the many question of my life meet the answers of yoga. The most important recognition was that Yoga is not a separated practice which happens only on a yoga mat or during meditation or pranayama practice, but it is a desirable way of how I spend all the day, do my work, walk the street, speak, think, how I am in my relationships. How I live my life.  And of course, how big challenge it is

I wanted to spend more time to discover this science and also to share the positive experiences with others in some way, so I started to seek all the things that support this “mission” such as yoga teacher course, workshops, dharma program, learning massage-techniques, I also changed the focus of my profession.

The essentials of the things I want to add to this life  – at the level, where I am now on my way- is some support for others to raise adequate questions related to their life, reduce stress and the general lack of energy, and try to find a state of living which is suitable for constructive actions and substantive changes.

Daily work, education, sport, singing in a band are all parts of my life, and yoga practice still remains present every single day of my life. I would like to give guidelines for others as well to integrate yoga into their everyday life.

The types of the yoga lessons are variable, I use different methods and adapt them for the practitioners. One day we focus on strengthening, dinamic movements or energizing sequences, other days comes stretching, static poses, calming sequences or focusing on an organ system.

Everyone has a different ability to perform poses so we use props like straps, blocks, blankets for support if it is necessary.

At the end of the lessons we do meditation, yoga-nidra, pranayama, deep relaxation or visualisation exercises.

For yoga students who are committed to develop their own practice I create personalized home practice sequences.

Thanks for my teachers: